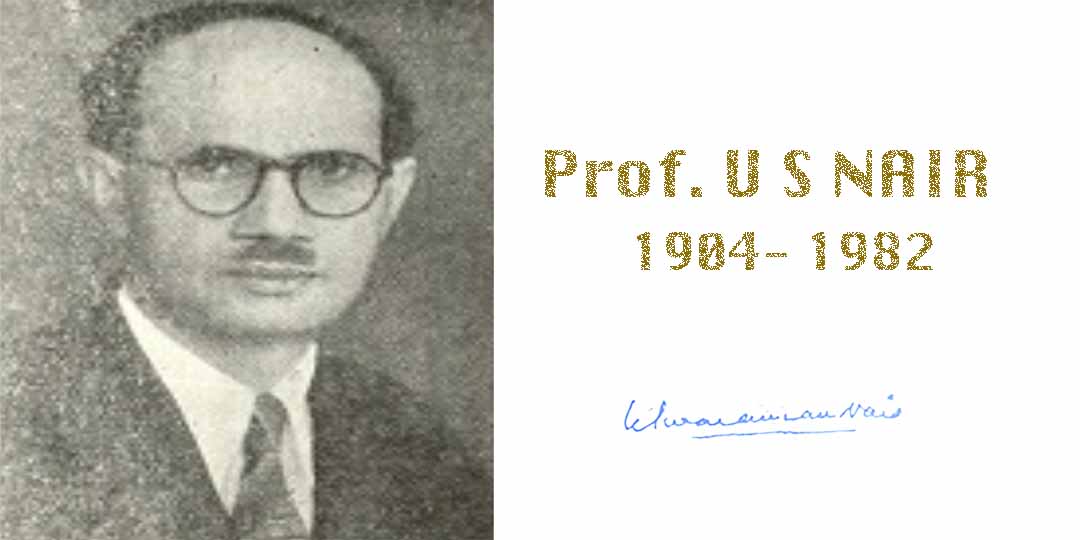 Dr. Nair started his career at Government level when he was put in charge of the “Scheme for Improvement of Agricultural Statistics” in 1949 under the Department of Research for the former Travancore University. Under this scheme Travancore became one of the pioneer states in India to introduce random sampling techniques for the conduct of crop cutting surveys on paddy during the summer season in 1950.

In 1951, the state government constituted Board of Statistics with the Director of Research, University of Travancore as Chairman. Dr. Nair as Professor of Statistics served as member of the Board to provide necessary guidance in all technical matters. The major items of work entrusted to the Board were the conduct of crop cutting surveys on paddy, land utilisation surveys and collection of price statistics and analysis of data.

Dr. Nair was appointed as Superintendent of Census Operations in former Travancore Cochin State for the 1951 census. His formula on Index of Approximation was very popular and was used to conduct a sample study for the entire nation on the basis of 1951 census.

Reports of Dr Nair for Directorate of Statistics

In 1941, Dr. Nair was appointed as Statistical Adviser to the Census Commissioner, and carried out the first Economic Survey of Travancore State. The other surveys conducted under the supervision of Dr. Nair are Cost of Living Index survey, Nutrition survey, Census of coconut trees and crop cutting experiments on paddy.

Unni Sivaraman Nair was the eighth of ten children of Sri. Unni Nair of Chavakkad, Guruvayoor and Smt. Rugmini Amma of Thiruvananthapuram.

Research: in 1937, he left for London and joined for PhD programme in University of London  under the guidance of Prof. E.S. Pearson, the son of Prof. Karl Pearson. In 1939, he returned from UK after receiving DSc in Statistics, the first of its kind to be received by an Indian from a Foreign University.

In 1924: Started his job as teacher in Department of Mathematics, Maharaja’s College, Thiruvananthapuram

In 1939: he joined as Assistant Professor of Mathematics in the Maharaja’s College of Science, Thiruvananthapuram

Dr. U.S. Nair has taken his relentless efforts to convince the growing importance of Statistics to the academicians in the University and administrators of Travancore State Government and to introduce Statistics as a subject of study at Post Graduate level. On the basis of his request, the University has constituted an expert committee to study the scope of forming such a department. The expert committee was under the chairmanship of Prof. P.C. Mahalanobis with seven other academicians including Dr. Nair from different Universities in India. The committee studied the feasibility of forming a PG department and outlined the syllabus of various courses.

In 1945, the first batch of MSc Statistics programme started and the University of Travancore thus became the second University in India to introduce a regular two year MSc Programme in Statistics.

In 1959, he retired from service and accepted the visiting Professorship of University of California. Thereafter, he was appointed as U.N. Statistical Adviser under the Economic Commission for Asia and the Far East (ECAFE) for six years.

His former students and admirers set up an organisation named Kerala Statistical Institute in his honour and Dr. U.S. Nair was its Chairman until his death on 8 August 1982 at 7.00 PM.

Children: five, four boys and one girl. The daughter is the wife of Sri. K.P.S. Menon (junior), retired Foreign Secretary to Govt of India

It was missionary zeal that Dr. Nair laid firm foundations and built a school of statisticians to teach and propagate statistics and to do research so that the benefits of this growing science were made available for the advancement of research and technology.